"I immediately thought 'Now here's a guy that knows what he's talking about!'" - Mike Taylor (upon reading the OFFICIAL AMS Review of Pam Taylor) 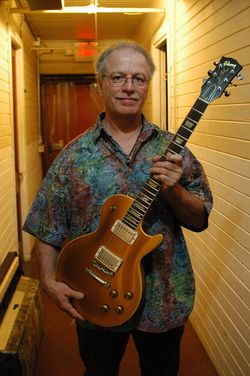 Joe Pitts is an outstanding musician. Not only can he play blues like no other, but he frequently dives into jazz and rock n' roll. Pictured here with Duane Allman's guitar, Joe Pitts is not only a great musician, but an incredibly nice guy. Stay tuned for  more information and a detailed review of one of his albums! And scroll down for my exclusive interview with Joe Pitts himself!
1. When and why did you start playing?
I was 6 and thought it’d be cool to play one of those guitars that i saw the
guys holding in their laps. (dobro)

2. Which instruments (aside from guitar) do you play?
Guitar, Slide Guitar, Lap Steel, Pedal Steel, Mandolin

3. What was the first tune(s) you learned?
Hmmm, that’s a while ago… Probably something of the Ventures..

4. Is your family musical?
My mom and sister both played piano.

5. Describe your family member's musical interests and abilities.
Had a ton of influence from mom and my sister. One end of the house was
rocking’ Mahavishnu, Hendrix, Cream, Beatles, Zeppelin, Allmans, …. the other
end, Merle Haggard, George Jones, Bob Wills, Tennessee Ernie Ford and more… So,
i got a little of it all… My sister was also deep into blues, and jazz.. Son
House, Muddy, Lightning, Bukka White, Leadbelly,, Coltrane, Miles, Parker….. I
was really influenced by music.. Not a style.

6. Which famous musicians do you admire? Why?
I respect any musician that does it right, for the right reason, the right
way, for the soul of the music. Doing it for a lifetime deserves a TON of
respect. It’s not an easy business.

7. Which famous musicians have you learned from?
I learn from great musicians, and those not as fortunate as me. Everyone has
something you can learn from.

8. Who was your first teacher? Other teachers?
My mom. She taught me theory from playing a piano, and I transcribed it to
the guitar.

9. Describe your first instrument. Other instruments.
An ol’ Kay flattop guitar, that was bigger than me, and the strings way off
the fretboard!

10. What are your fondest musical memories? In your house? In your
neighborhood or town?
Playing a 16th century theatre in Italy that Mozart played in. Having my dad
who was 90 at the time, come to one of my shows.

11. Were you influenced by old records & tapes? Which ones?
ALL of them you can think of. In every genre music came from.

12. Who are your favorite musicians? Groups? Albums?
Allmans, Charlie Daniels, Walter Trout, John Mayall, Zep, Jeff Beck…. man,,
too many to list..!!! I could go on and on for days.. My favorite guitarists
right now,…. Jimmy Herring and Sonny Landreth.

13. How do you handle mistakes during a performance?
We don’t make a lot of mistakes. We pride ourselves in hitting the note. When
we do, usually we’re the only ones who know "Hey,, that didn’t go there"!!!
LOL.. But, poker face.. Playing through..

14. Do you get nervous before a performance or a competition?
Performance wise, nah.. it’s just business as usual. We’ve done this several
thousand times. Competition? No.. We don’t compete. We leave that to those who
feel the need to be something they aren’t. Music isn’t a competitive sport. Like
I said, we leave that to the ones who think they have to compete, buy and use
every means necessary to try and get ahead, instead of using perseverance and
hard work. When you get into the professional ranks, you’ll find some of the
coolest, laid back cats. Mostly the locals and amateurs are the ones who feel
the need to compete.. Me, i’m only in competition with myself. I lose that
battle sometimes.

15. What advice would you give to beginners who are nervous?
Have fun. It’s not brain surgery. Mistakes are the pathway to perfection.
Enjoy it, love it, have fun with it. Music isn’t perfect. It’s passionate. It
has a soul.

16. What makes a good session?
When musicians come prepared to take music to another level, and are
prepared when they arrive. It’s been called, "hitting’ the note". We try to do
that, to the best of our abilities. Instead of having to resort to manufacturing
things in the mix to make you sound good. We record ALL analog. No computers
period. We either play it, or you don’t hear it.

17. How often and for how long do you practice?
When I get a chance. I don’t get to really "practice" because I play a lot.
But, with my schedule now, it’s usually 6 or 8 hours a week.

19. Why blues?
Well, blues is where it’s all come from. You have to know the blues before
you can go anywhere else.

20. What was the most embarrassing moment you've had in your career so
far?
Luckily I’ve not been embarrassed…… yet. LOL!!!

21. Tell me about your band. Who is in your current lineup? How did you meet
them?

Stuart Baer, - Keys/Hammond, Chris Moore - Drums, Al Hagood - Bass Guitar. Me
and Chris go back to the mid 90’s. We’ve played a ton of gigs. Al and me were in
Liquid Groove Mojo, when the craziness really started in 2004. I’ve known of
Stuart back when he was with Michael Burks. We ran the same circles and finally
our paths crossed at the right time. I will tell you this. These are 3 of the,
if not THE best musicians in Arkansas. These aren’t amateurs who just started 6
months ago. These guys are world class, professional, worldwide touring
musicians. I’m just blessed that they let me play with them.

22. Tell me about your gear. What strings, picks, guitars, pedals, etc. Do
you use?
Mostly Gibson guitars. A Whitfill Tele, Carol Ann Amps, Fuchs Amps. Jazz III
picks, Curt Mangan Strings. 99% of all my pedals are stuff you can go pick up at
Guitar Center. I don’t have "the magic pedal". I am fortunate to have
endorsements with all these folks, except with Gibson. I’ve played Les Pauls and
others since the 60’s.

23. Of all the incredible musicians you've performed with, who is your
favorite?
I’ve played with a bunch. Gregg Allman, Bobby Bland, Eric Gales, Tommy
Shannon, Zac Harmon, Smokin’ Joe Kubek, Lance Lopez and a bunch others.. My
favorite was probably playing quite often with Tommy Crain. Tommy was Charlie
Daniels guitar player on ALL those songs you can name. He was one of my early
musical hero’s, and he became a very good friend.

24. Is there a particular venue that you make sure to play on every tour?
(Favorite venues?)
Not really. We like playing to people at all kinds and every venue we can get
in. We like taking the music to new people all over the world.

25. Tell me about your newest album. What are the untold stories of your
recording sessions?
Stay tuned.. Joe Pitts Band "Axe To Grind" will be out this spring/summer.
The recording sessions have been sick. We have LOTS of very special guests on
this, and are doing things quite differently too. So, stay tuned folks.!!!

26. Is there anything else that you'd like to share with the fans?
We’d just like to thank you for supporting the JPB, and for coming out and
allowing us to play for you. We do this because of all of you… the fans. It’s
not because of us. It’s because of YOU. And we thank you so much for it.

For more from the incredible joe pitts band.....